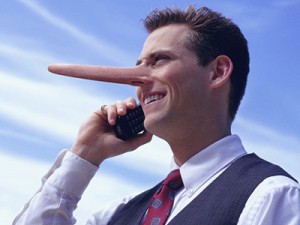 Continuing from our last post which focused on this article in Fraud Magazine, here are some additional signs of deception to watch for when investigating potential fraud.

Equivocation
A deceptive subject may try to avoid an interviewer’s questions by qualifying statements with expressions of uncertainty, weak modifiers, and vague expressions. Investigators should watch for clues such as: “I think,” “I guess,” “sort of,” “maybe,” “might,” “perhaps,” “approximately,” “could have been,” etc. Vague statements and expressions of uncertainty provide some leeway to modify assertions at a later date without directly contradicting the original statement.

Oaths
Deceptive subjects try to give interviewers as little useful information as possible, while also trying hard to convince interviewers that what they say is true. Deceptive subjects often use mild oaths to make their statements sound more convincing. Be on the lookout for common expressions such as: “I swear,” “on my honor,” “as God is my witness,” “cross my heart.” Truthful witnesses are more confident that the facts will back up their account and thus may feel less need to bolster their statements with oaths.

Euphemisms
Statements made by guilty parties often include mild or vague words rather than their harsher, more explicit synonyms. Euphemisms tend to portray the subject’s behavior in a more favorable light and minimize any harm the subject’s actions might have caused. Investigators should look for euphemistic terms such as: “missing” instead of “stolen,” “borrowed” instead of “took,” “bumped” instead of “hit,” and “warned” instead of “threatened.”

Alluding to rather than admitting actions
People sometimes allude to actions without saying they actually performed them. The author gives an example of the following statement from an employee who was questioned about the loss of some valuable data: “I try to back up my computer and put away my papers every night before going home. Last Tuesday, I decided to copy my files onto the network drive and started putting my papers in my desk drawer. I also needed to lock the customer list in the office safe.” Did the employee back up her computer? Did she copy her files onto the network drive? Did she put her papers in the desk drawer? Did she lock the customer list in the office safe? The employee alluded to all these actions without saying definitively that she completed any of them. An attentive investigator should not assume that subjects perform every action they allude to.

Protect Yourself from Fraud: Watch for Signs of Deception

Following up on our previous post from guest blogger Eric Williams about the devastating impact of financial fraud on small businesses, Eric sent me a link to this article in Fraud Magazine. According to the author, Paul M. Clikeman, who is a certified fraud examiner and a professor of accounting at the University of Richmond, fraud suspects and witnesses often reveal more than they intend through their choice of words. The article goes into some detail about ways to detect possible deception in written and oral statements. Here are three signs of deception:

Lack of self-reference
Truthful people often use the pronoun “I” when describing their own actions. For example, a truthful witness might say: “I arrived home at about 6:40 p.m. After I walked into the living room, I noticed that my flat screen TV was missing and I saw a lot of my business papers scattered on the floor.”

Another way to reduce self-reference is to substitute the pronoun “you” for “I.” Consider the following response to the investigator’s question:
Question: “Can you tell me about reconciling the bank statement?”

Answer: “You know, you try to identify all the outstanding checks and deposits in transit, but sometimes when you’re really busy, you just post the differences to the suspense account.”

Verb tense
Truthful people usually describe historical events in the past tense. Deceptive people sometimes refer to past events as if the events were occurring in the present, which suggests that the speaker is rehearsing the events in his or her mind rather than recalling from memory. Pay close attention to the narrative if the speaker shifts to inappropriate present tense usage.

For example, consider this response from an employee being questioned about an alleged theft of a daily cash deposit:

“After closing the store, I put the cash pouch in my car and drove to the bank. It was raining hard. I drove around back to the night depository slot. When I stopped the car and rolled down my window, a guy jumps out of the bushes and yells at me. I can see he has a gun. He grabs the cash pouch and runs away. After he was gone, I called the police and reported the theft.”

The first two sentences describe an employee’s drive to the bank in the past tense. But the next three sentences with italics describe the alleged theft in the present tense. An alert investigator might suspect that the employee stole the day’s cash receipts, then drove to the bank and called the police from the bank parking lot to report a phony theft.

Answering questions with questions
Even liars prefer not to lie. Outright lies carry the risk of detection. Before answering a question with a lie, a deceptive person will usually try to avoid answering the question at all. One common method of dodging questions is to respond with a question of one’s own. Investigators should be alert to responses such as:
• “Why would I steal from my own brother?”
• “Do I seem like the kind of person who would do something like that?”
• “Don’t you think somebody would have to be pretty stupid to remove cash from their own register drawer?”